I’ve been a silent stalker of Dessert Wars for a couple months now and decided to finally give it a shot and jump on board!

The theme for April is vanilla bean and it was a fantastic time to decide to participate, because Brent from Beanilla was offering the first 15 commenters, 3 FREE vanilla beans.  And this is where that whole stalker thing finally worked in my favor… I happened to be the first one to comment!

I’ve never worked with vanilla beans before so I was really tickled! They arrived in a vacuum-sealed pouch and when you opened it, the smell hit you immediately!  It was fabulous! 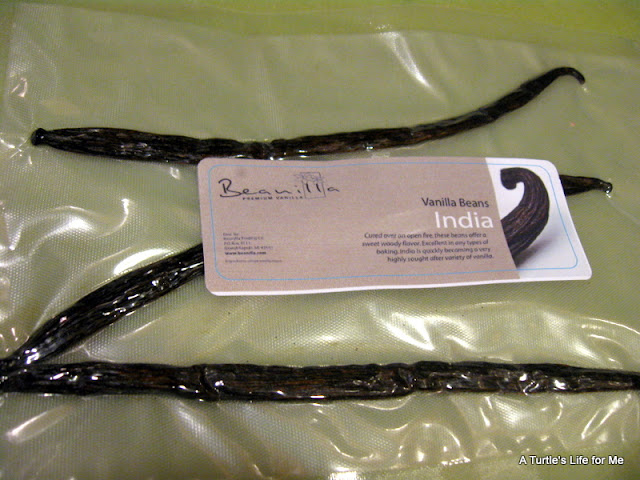 The kicker for this particular contest was that you had to make a dessert that had 3 parts and each part had to use one of the vanilla beans.

I was stumped.  All I knew for certain was that I wanted to make this for Easter so that I didn’t end up eating the whole thing by myself.  But everything I came up with, only had 2 parts. Or had 3 parts, but not each part would contain vanilla.

Then I was searching for other recipes to make for Easter and decided to make some raspberry scones.  Duh!  Why not just make them vanilla scones!  And ta-da!  A new recipe was born that combined elements from a bunch of different scone recipes that I’ve tried over the years and loved!

I’ll give you the full recipe down at the bottom of the post, but walk you through my pictures now!

To use a vanilla bean, I took a sharp paring knife and sliced down one side of the bean.  Using the tip of the knife, scoop out all the gooey black stuff inside.  Get it all, it’s vanilla gold and you want it! 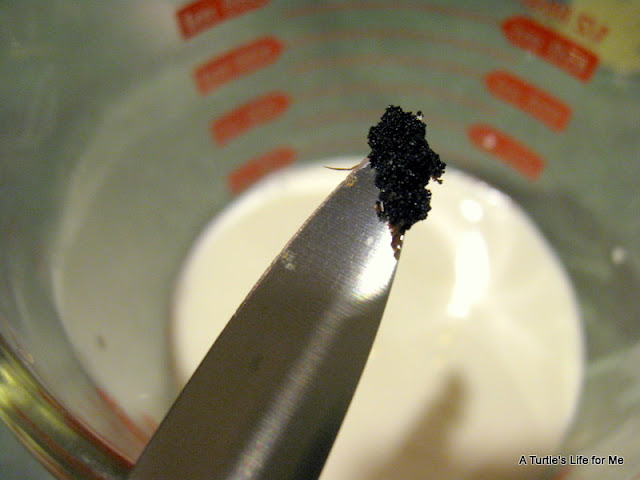 I stirred it into the heavy cream that the recipe called for and let that refrigerate for 30 minutes or so to give the flavors time to meld, while I got the rest of the ingredients together. 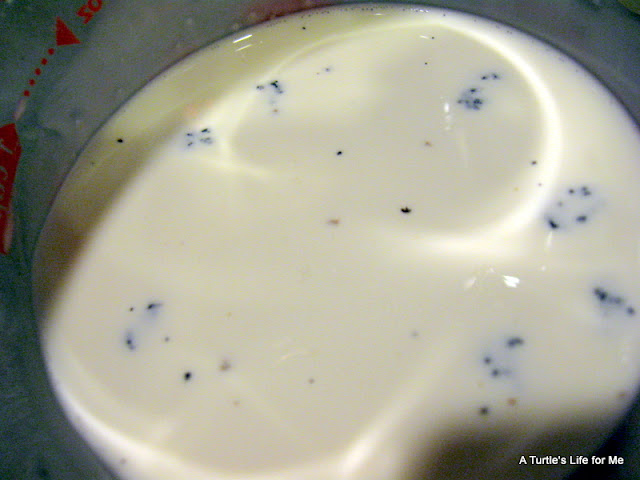 Make the pastry for the scones and divide it in half.  Pat one half out onto a floured surface and pat it into a rectangle shape.  Place that on your cookie sheet (I use a Silpat liner).

For the cream cheese filling, mix a block of softened cream cheese with the good stuff from another vanilla bean (I did this ahead of time as well so the flavors could combine). 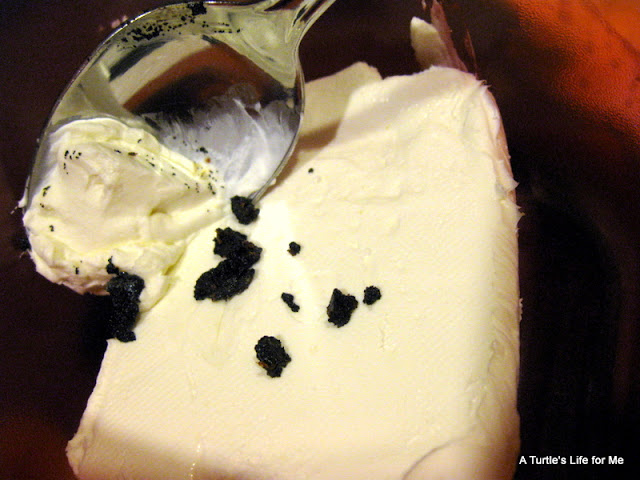 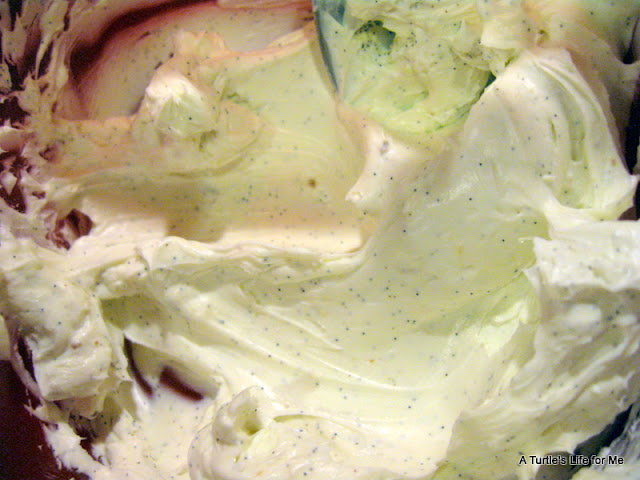 Then spread the cream cheese across the rectangle of dough on your cookie sheet. 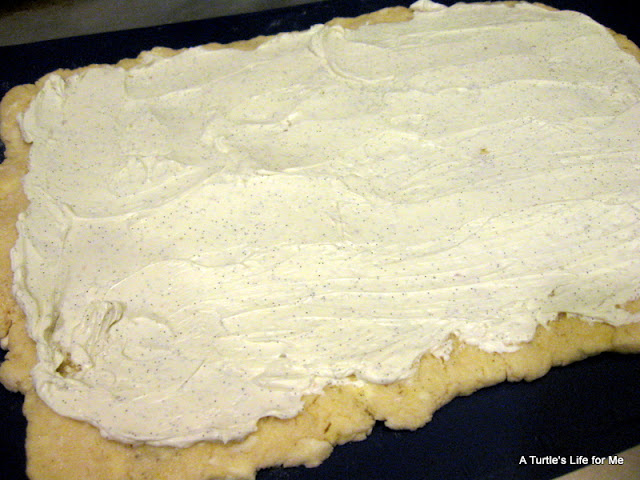 Take the rest of the dough in your bowl and pat it into a rectangle that’s the same size as your first.  Carefully lift it and place it on top of the cream cheese.

Using a knife, score your pastry into triangles. 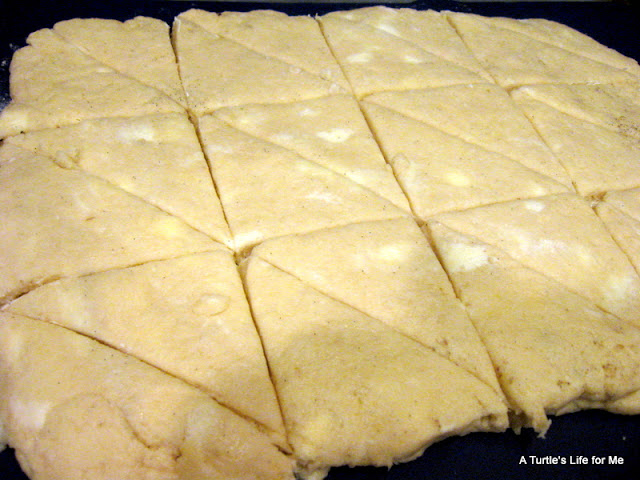 Bake at 350 degrees for about 20 minutes or until it starts to turn golden.  Cut the whole way through and then let sit on the cookie sheet for 15 minutes or so to cool.  Then move to a cooling rack to cool completely.

While they’re cooling, mix up your vanilla powdered sugar glaze so…  yep, yep, yep… the flavors have a chance to meld!  It’s all about the melding, people!!

I like to just dunk them upside down in the glaze and then give them a little push down to get even more of the goodness. 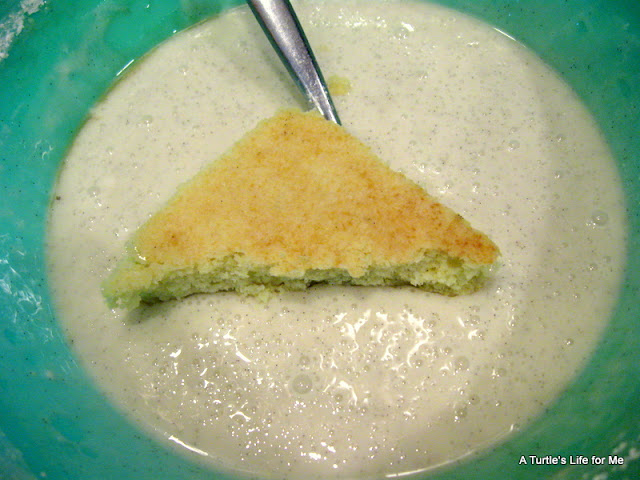 Let the excess glaze drip off a bit. 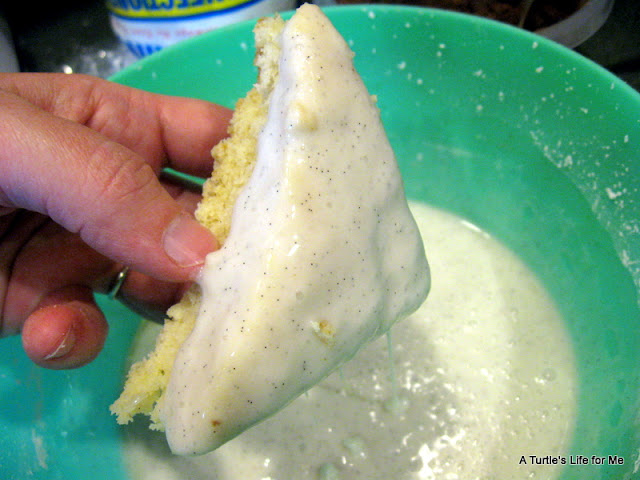 Here’s a pic before the glaze, just so you can see the cream cheese layer in the middle. 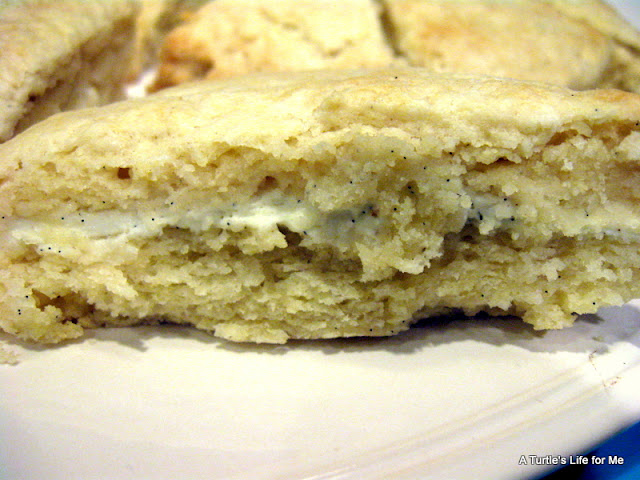 And here it is in all it’s flaky, buttery, vanilla-ey goodness. 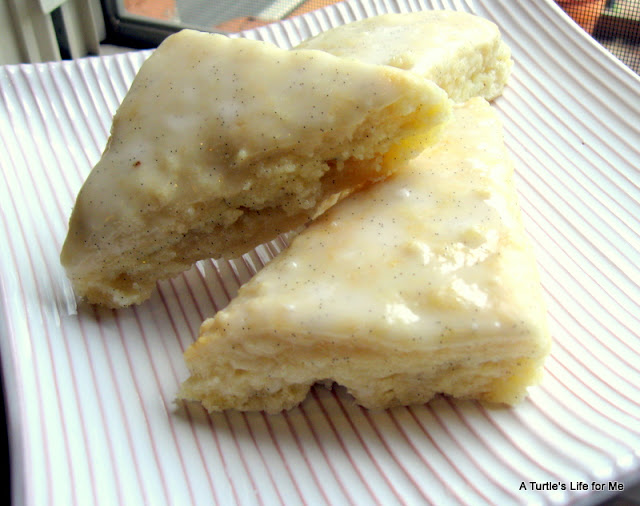 This recipe is definitely a keeper! And in the end I was so tickled that we were forced to add that 3rd component, because the cream cheese center really sets these apart from your standard scone!

Split one vanilla bean down the center and scrape out the insides. Stir the black vanilla insides into the heavy cream and let sit for 15-30 minutes.

For filling, scrape the second vanilla bean and mix with softened cream cheese. Set aside.

Stir together flour, sugar, baking powder and salt. Cut cold butter into slices and use a pastry cutter to cut it into the flour mixture.  Keep going until it resembles coarse crumbs.

Mix vanilla cream with the egg. Combine with flour mixture and gently stir with a fork until just combined.

Take half your dough onto a floured surface and gently press it into a rectangle. You can use a floured rolling pin if you want to. It should be about 1/2″ thick or maybe a little less.  Gently lift up and transfer to cookie sheet that’s lined with baking mat or parchment paper.

Pat the remainder of the dough into a rectangle of the same size and place on top of cream cheese.

Score the pastry into triangles.  I was able to get 24 triangles out of my pastry.

Bake at 350 degrees for about 20 minutes or until it starts to turn golden. Cool on pan for 15 minutes and then transfer to cooling rack to cool completely.

For glaze, mix all ingredients until you get the consistency you want (I added a bit more powdered sugar so it wasn’t quite so runny).

After the scones have cooled, dunk in the glaze and then put back on cooling rack so the glaze can set.  Enjoy!!

This was a wonderful way to use the last of my vanilla beans and cream cheese! I refrigerated the extra and thanks to the cream cheese, they weren't dry the next day like many scones.

These look wonderful! Very creative adding the cream cheese middle. Good luck. I really like your instruction too:)

Those are really lovely.

These are delectable! I love the cream cheese middles - what a nice touch! Thanks for entering!

I've been craving some scones lately. These are lovely. Good luck in Dessert Wars!