This is such an exciting post for me!  My very first challenge!!  I was SO beyond excited when I got the email that I was going to be participating in The Scribble Shop Challenge!  So excited, that I’m pretty sure I called my husband and did a little squeal… and let’s face it, that in itself is a pretty big deal because, while we used to have 4-hour long phone calls in college, this whole being married-living together situation has put a damper on our phone relationship!  So BIG thanks to The Scribble Shop for giving me a reason to call my husband during the day!  I’m sure he’s most appreciative!!  : )
Then it was just a waiting game until one day the box showed up on my doorstep and I opened it to reveal all this lovely goodness!  And, GASP… I had NO idea what I was going to make out of it! 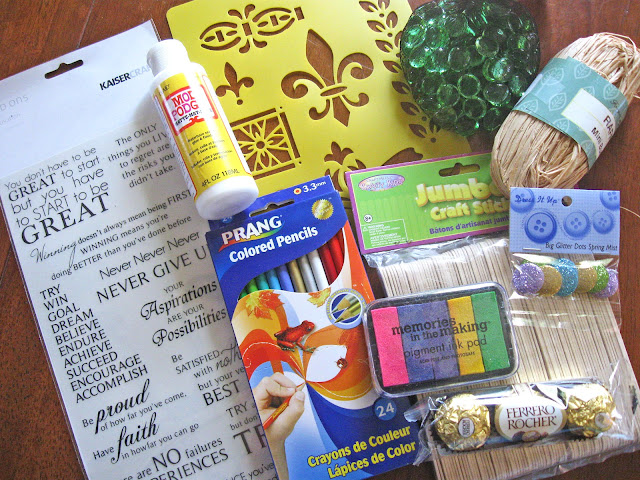 Supplies:
Decor Stencil
Jumbo Craft Sticks
5-Color Pastel Stamp Pad
Inspirational Rub-On Quotes
Mod Podge
Natural Raffia Mini-Bundle
Apple Green Glass Gems
Thick-Core Colored Pencils
Spring Dress It Up Embellishments
and some Ferrero Rocher candy!!
Before we go any further, I have to take a moment to point out my favorite thing (yes, even
more than the chocolates!)!    I just adore a brand new box of colored pencils so much! 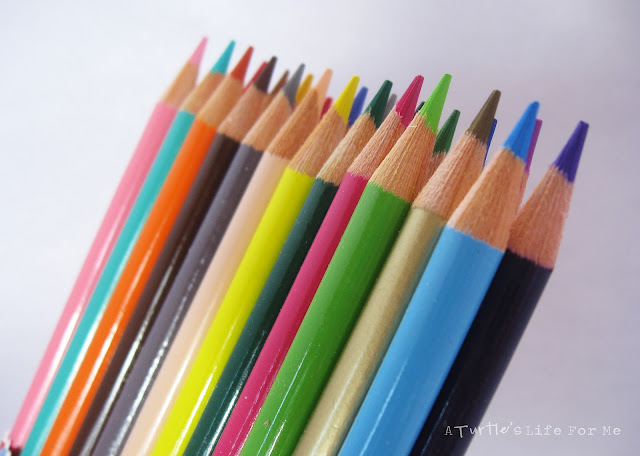 Aren’t they soooo beautiful!  I could just stare at them all day! And this was a pretty cool box, because you could flip the lid back and make a little easel for yourself. Love nifty things like that.
Anyways… back to me having no clue what I was going to do!
I’m going to be completely honest and tell you that from about the 2nd day of having this box, up until this past weekend, I thought I knew what I was doing.  I even was a doll and spent way too much time working on it.  Had all the pieces laid out, and went to do the final step this weekend and it just was not what I was going for.  Wasn’t looking good and there was no clear way to salvage it.
So I walked out into the garage to cry to talk to my husband and I spotted a pile of wood I had cut from a pallet earlier this summer. I love making projects out of scrap wood – like my DIY wood coasters, upcycled cabinet door art hanger, halloween decorations … I could go on and on!
As soon as I saw the pallet wood, I knew instantly what I was doing and the whole project was said and done in less than an hour.  Seriously, this was so easy and cheap and I’m just loving the way it turned out! So, I present, my pallet wood jewelry holders! 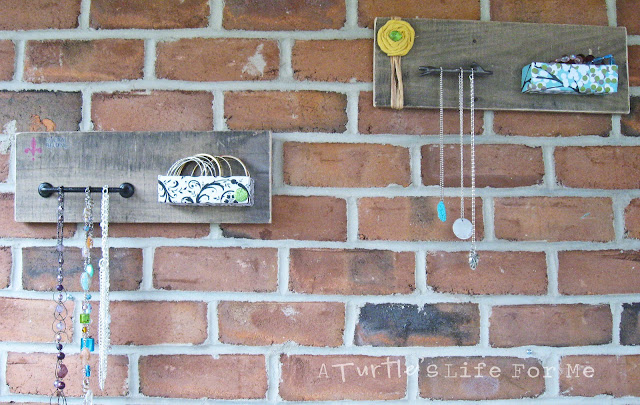 I started with the 2 pieces of pallet wood. 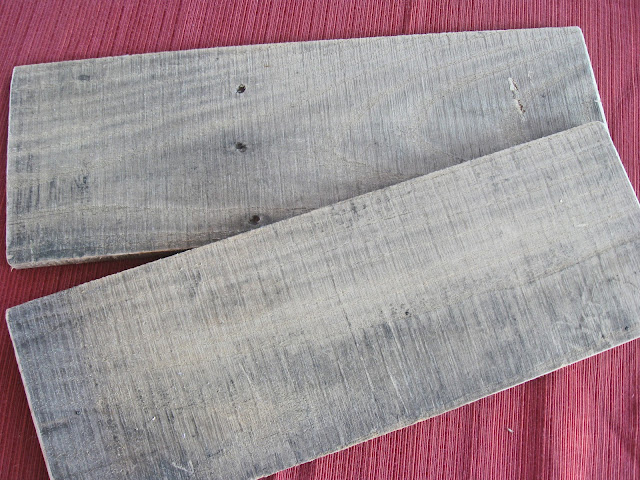 For one piece, I took the stencil and a colored pencil and put a little accent on the one corner.
Then I took the rub-on quotes, and cut out the 2 words that I wanted from that phrase. 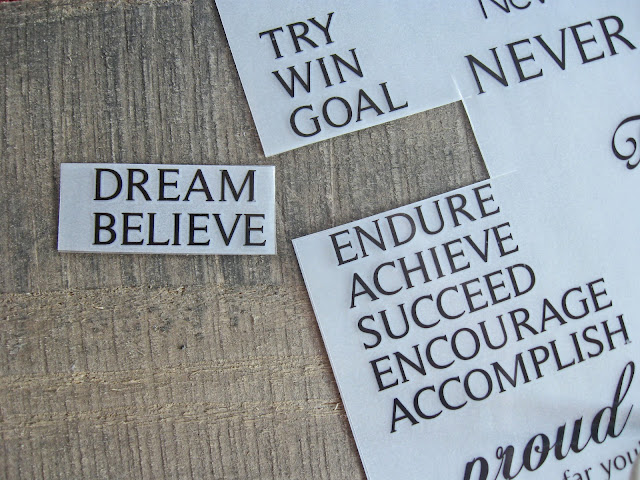 I used one of the craft sticks to rub it on the wood and I just love how it came out all worn and weathered looking next to the pink stencil! 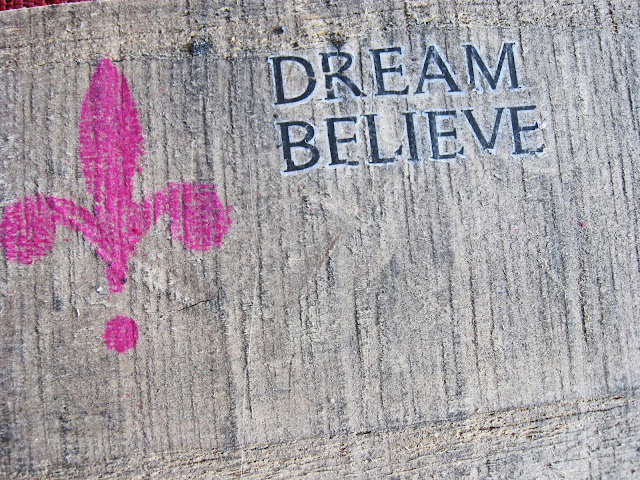 For the other board, I took the raffia and wrapped it around one end, hot-gluing it on the back. 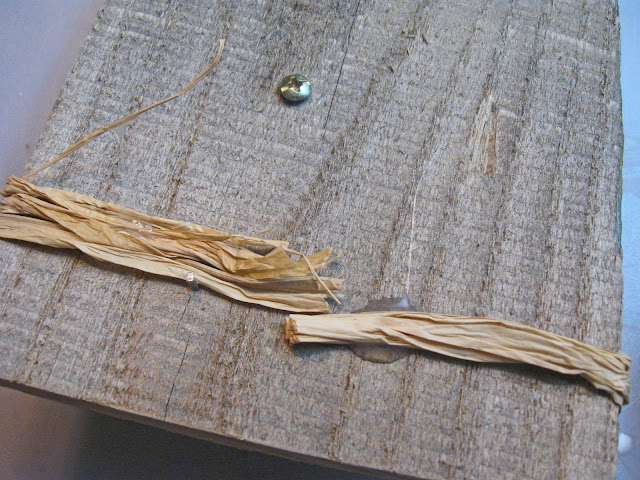 Then I bunched up some craft sticks with a rubber band and clamp and
used a jig saw to cut the rounded ends off. 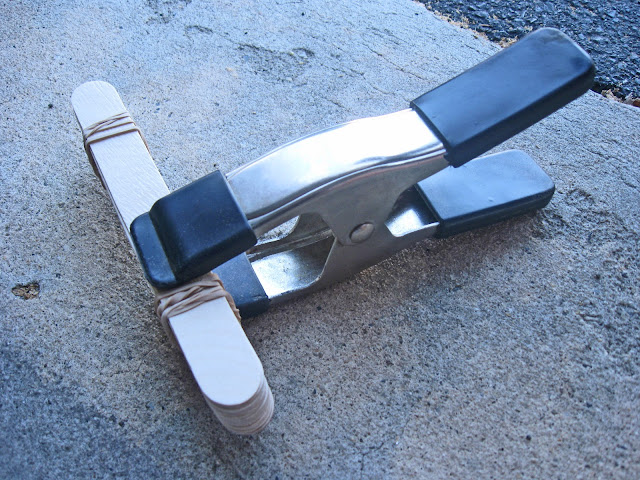 Most of them, I just cut the ends off, but for others, I cut the ends off and then cut the remaining straight portion into 3 equal pieces.  These pieces that were cut in thirds would be the sides of my box. 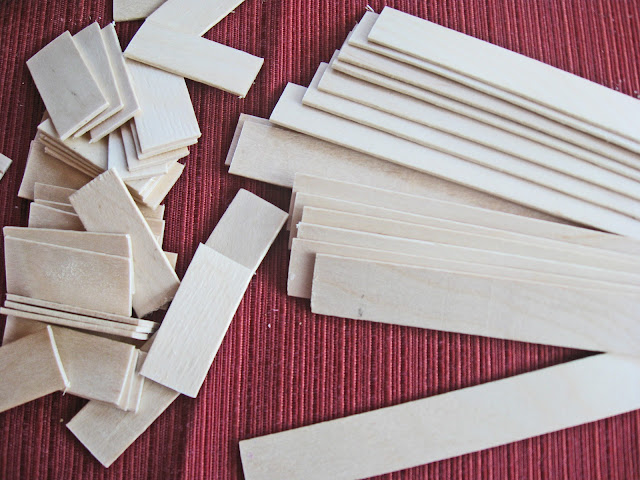 Then I found a shoebox in our recycling, that I cut some templates out of for the base of my box shape.  I knew I needed something to glue the sticks to, to help them keep their form.  I also knew, I couldn’t just use the box without the craft sticks on top, because then you’d be able to see the print from the shoebox come through your paper.  So I doubled-up and used the box with craft sticks glued to it!  This is a picture of my box form once it was glued together using a hot glue gun.  Notice I have a little bit of a back to it?  That will be what I use to hot glue it to the board once it’s ready. 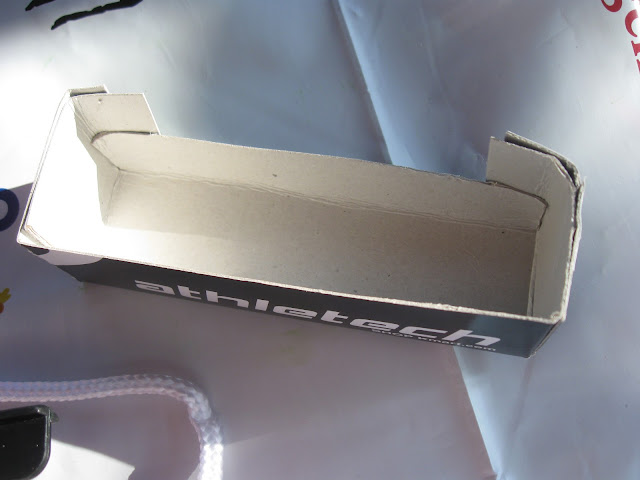 I just hot glued my sticks all over the cardboard box. 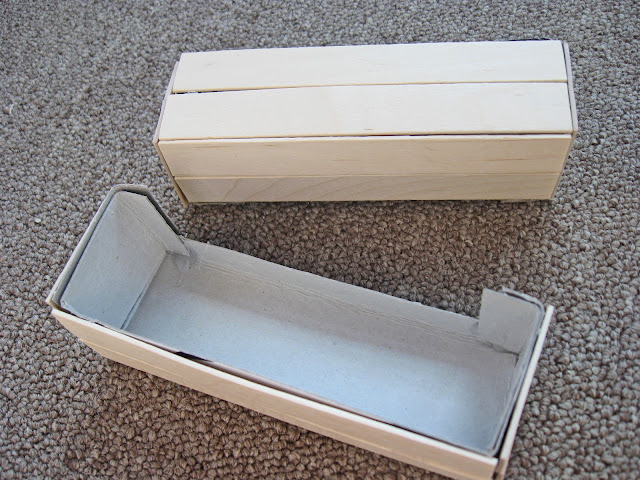 paper and then I attached the entire box to the board with my hot glue gun. 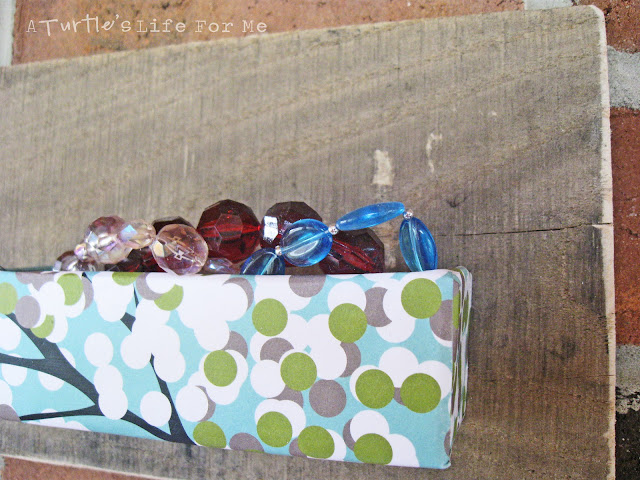 For the other board, I added a sparkly embellishment to the corner of the box to jazz it up a little.  I love the contrast between the roughness of the wood and the classy pattern on the box! 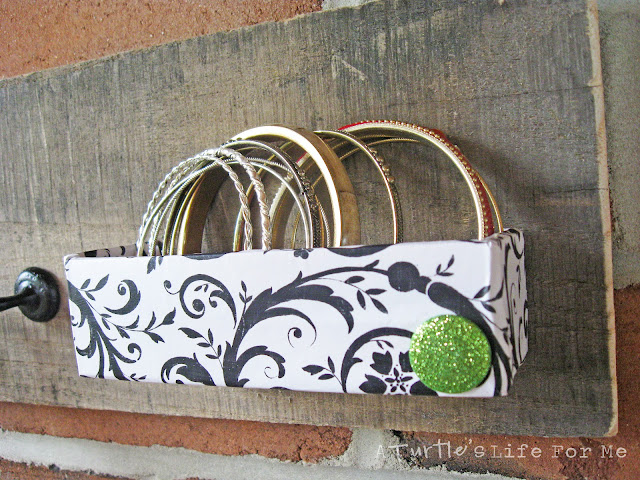 I added some drawer pulls that I picked up at Lowe’s awhile ago.
They were on clearance for 30 cents each!  Score! 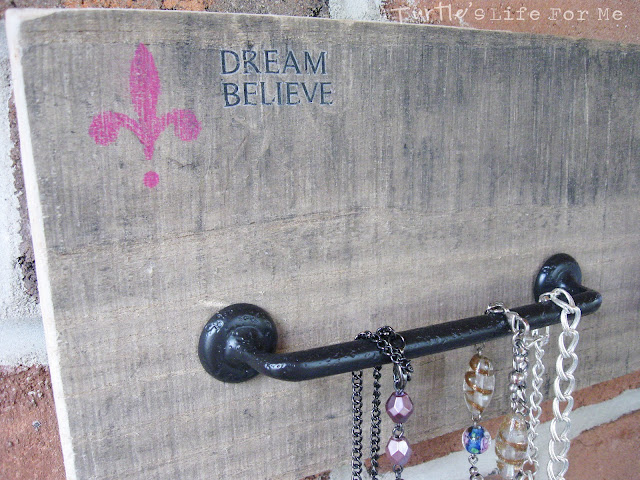 For the raffia one, I made a fabric rosette out of scrap fabric and glued it on with a glass gem glued to the center.  I love how the green gem mimics the green dot leaves on the scrapbook paper!  And I picked the twig drawer pull to use for this one since the paper had a tree on it! 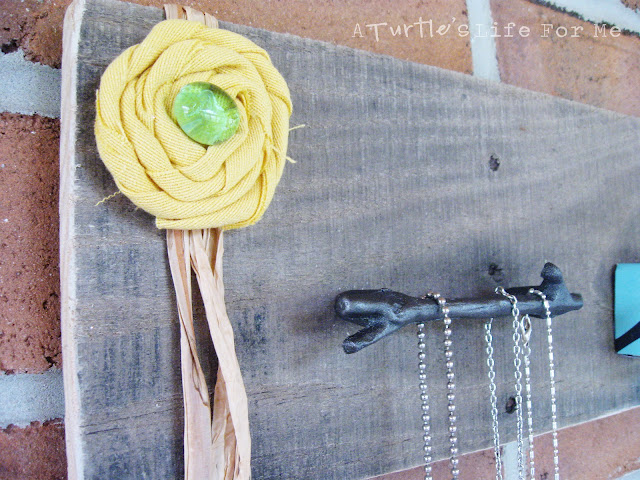 I LOVE how they turned out!  Only about an hour’s effort and very simple supplies! 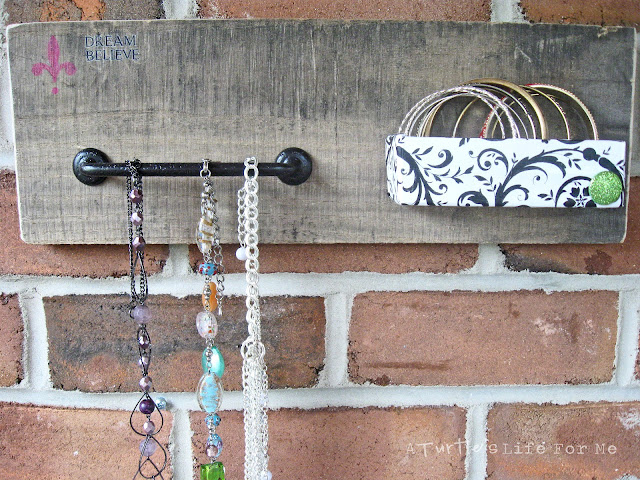 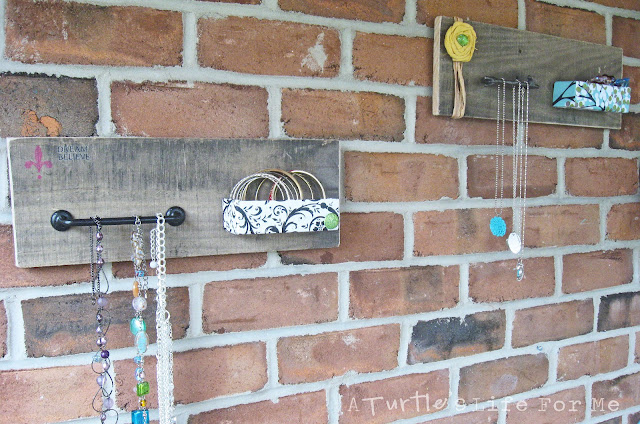 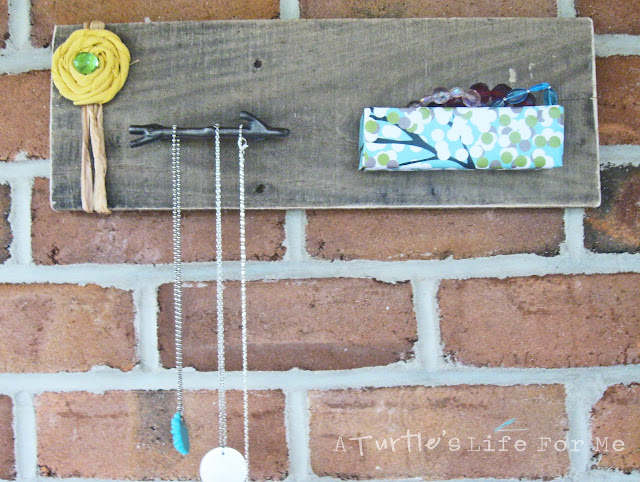 And just because I know you’re all dying to see, this was my original idea… it was an empty salt canister that I was thinking I could use as a utensil holder for Easter.  Oh well! 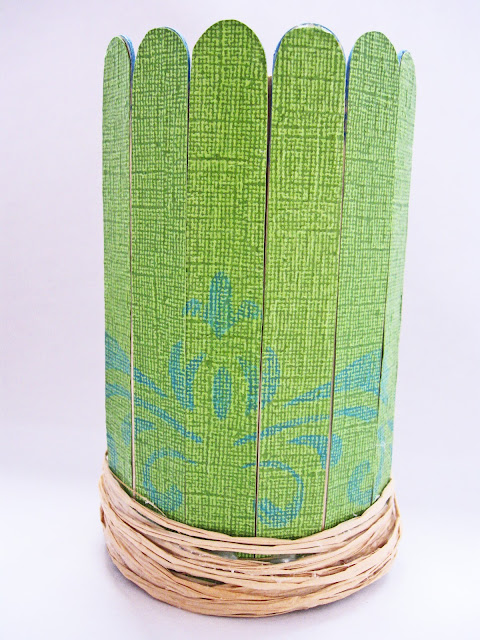 A huge thanks to The Scribble Shop for letting me participate!

Disclosure:  I was given supplies and compensated for this post, but all ideas and opinions are 100% mine.

[…] Pallet wood jewelry holder at A Turtle’s Life For Me […]

Thank you for participating in the Scribble Shop Challenge.

This is an amazing idea, I really like how you made the boxes out of the sticks and the flower looks great!

We are posting the finalist on our facebook page http://www.facebook.com/ScribbleShop tomorrow, March 30th, 2012.

Such a smart solution for storing jewelry. I love that there's a spot for bracelets -- I never really see bracelet storage ideas anywhere, so thanks for that!

And, the colored pencil pic? AWESOME! :)

This is really great - I need one. Or five :D