What do you get when you have 2 hours to put together a dessert and must use only what you can find in your pantry??  A well-stocked pantry, but still… 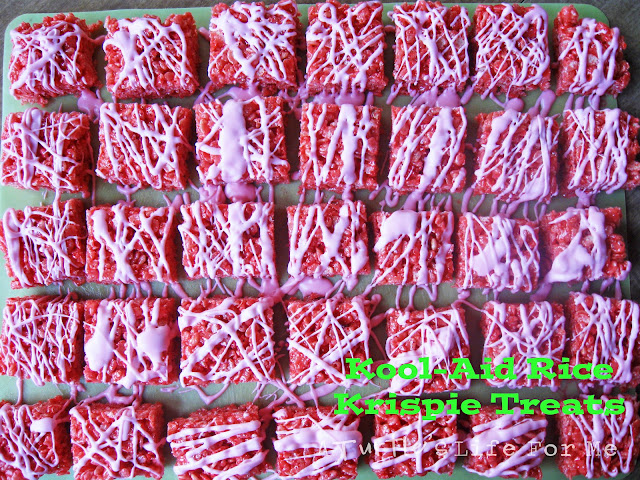 We had a busy, busy, crazy weekend… dinner out, dance show rehearsal, Who’s Bad concert, 2 dance shows and a piano recital.  I needed a treat to take to the dance show recital and wanted something that wouldn’t tempt me at all!  That doesn’t mean these are bad… just not something along my normal chocolate/caramel/peanut butter theme.  The kids loved them, though!

It started because I found these 2 things in my pantry and was so excited that they were both cherry-flavored!  Coincidences don’t happen often around here, so I seized the Kool-Aid connection while I could! 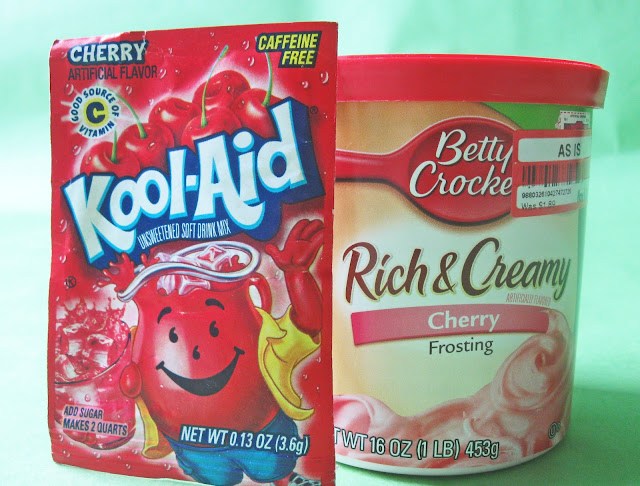 Plus, I had picked up the frosting for a whopping 46 cents and the Kool-Aid for 10 cents, so I was feeling pretty okay if this recipe didn’t turn out! 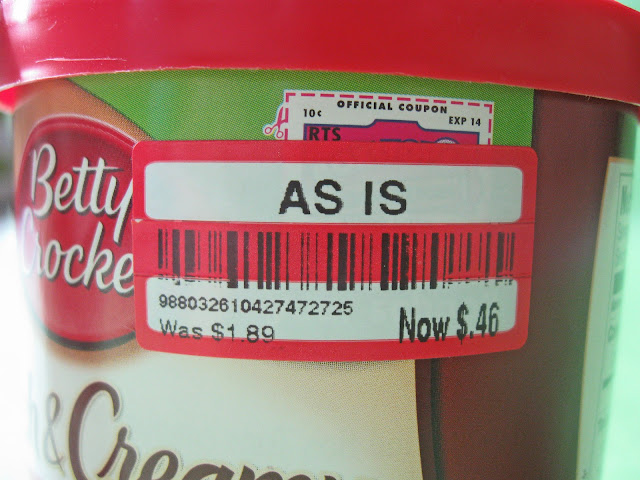 Just make your Rice Krispies as you normally would, and when you add the marshmallows to your pot to melt them, throw in a packet of Kool-Aid.   Keep stirring it all up until everything is melted and smooth! 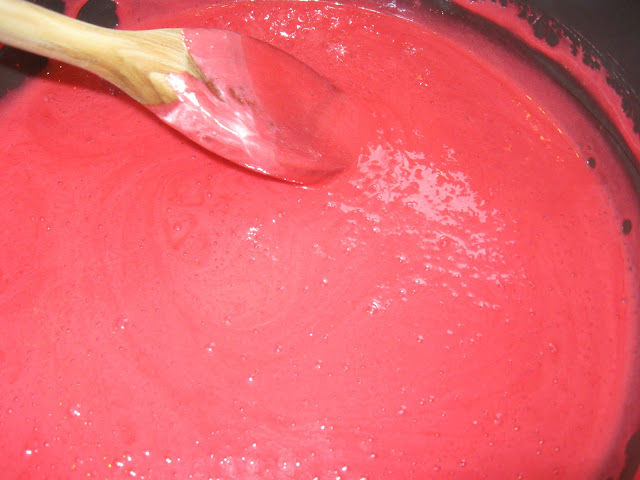 Add your Rice Krispies and then spread into your pan.  I quick spray the back of a wooden spoon with one squirt of cooking spray and then use that to pat them down nice and firm.  Really helps with the sticky problem! 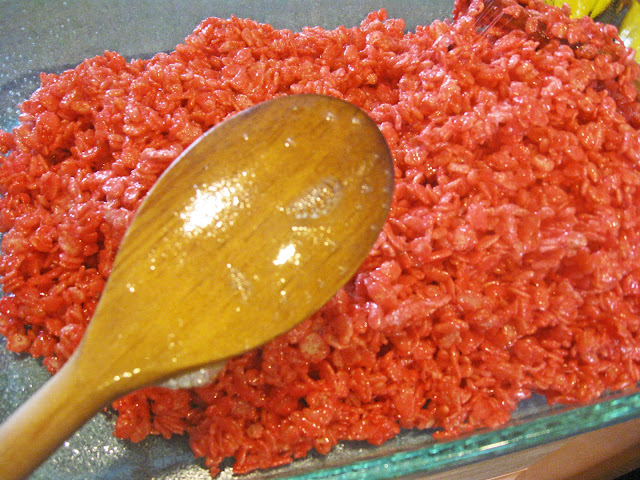 After they’re set, I put about 1/2 cup of frosting in a bowl and microwaved it for about 10-15 seconds until it was pourable.  Then I just drizzled it over the Rice Krispie treats. I cut mine first so I could get some drizzles down the sides, but you can leave it in the pan and just drizzle if you want. Go ahead, just drizzle it, baby. 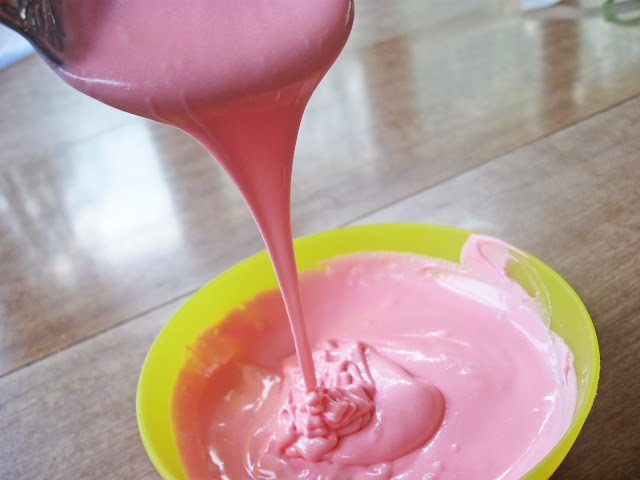 Melt your butter in a large pan over low heat.  Then add marshmallows and Kool-Aid packet, stirring constantly until melted and all mixed together.  Remove from heat and stir in your Rice Krispies.  Spread into a greased 13×9 pan. Once they’re set, heat your frosting for 10-15 seconds and then drizzle over Rice Krispie treats. 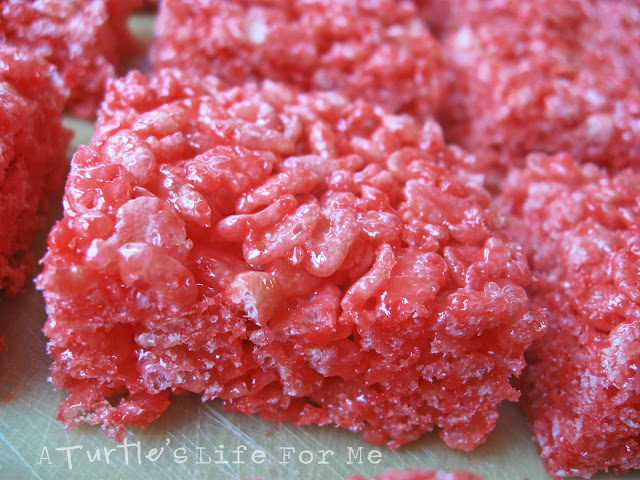 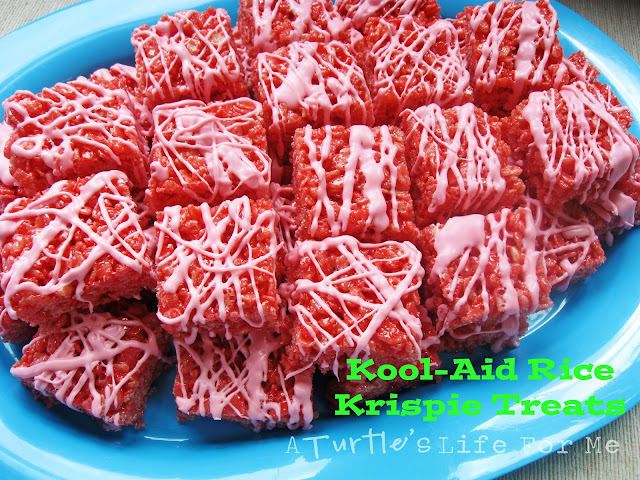 These look awesome. And I think I can create these easily enough!! I am picturing RED AND GREEN for the kids' Christmas party... Green for St Patty's Day... Red for Valentine's Day... Please tell me they did not stain the kids' hands as they ate them!!! Because for some sick reason, I want BLUE and BLUE will be very hard to get out. LOL!!!!! Thank you for the recipe idea!!! ~Becca~

They look soooo yummy! Been looking for some fun things to make with the kiddos this summer... I think this fits the bill! Thanks!

I made these with strawberry kool-aid!

I just made them with "Ice Blue Raspberry Lemonade" flavored Kool-Aid. They were a little tart so I add blue melting chocolates on top and then added sprinkles. They look awesome!

I love the color! And they sound fruity and good too. :)