It’s not too late. It’s never too late to start something.  I think I need that on a bumper sticker.

We went to a Halloween party last night and somehow, I thought I had enough time to drop the kids off at the grandparent’s, run to the store, drive 25 minutes home, make a dish to take, start and finish both my husband’s costume and mine, and get a bubble bath while I read my book…  all in an hour and a half.

And yanno know what??  I did every single thing except I swapped the bath for a shower and was only about 2 minutes late!!  It’s never too late to start something.

I just made my standard recipe for 7 Layer Dip with a little embellishment on top! 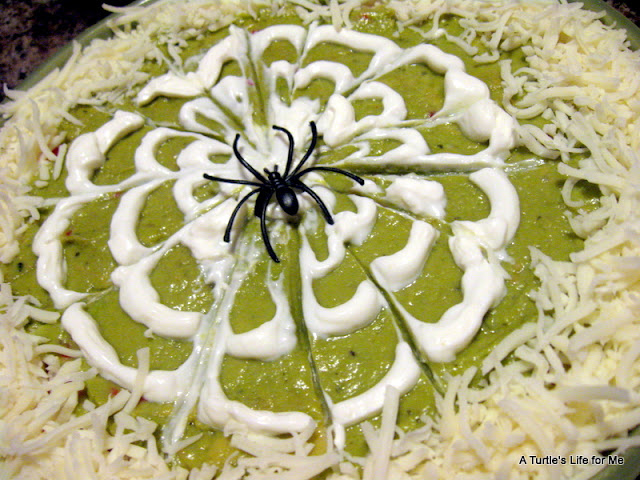 The web would have looked a lot nicer if I had given my cream cheese time to soften so it wasn’t so lumpy, but oh well.

Mix 1 can of refried beans with a packet of taco seasoning mix and spread on bottom of pie pan.

Mix 8 oz. of cream cheese with a carton of sour cream and spread on top of beans.

I sprinkle diced jalapeno peppers on top but you can leave that off if you want.

Spread shredded cheese on next and then carefully spread salsa on top of that.

Spread guacamole on next.

I put some of the cream cheese/sour cream mixture in a baggie and snipped a corner off and then piped circles on top of the guac.  Then carefully run a knife through the sour cream towards the center to drag your lines in.

Around the outside, I sprinkled more cheese, but you could sprinkle chopped tomatoes and shredded lettuce if you had left more time than I did! 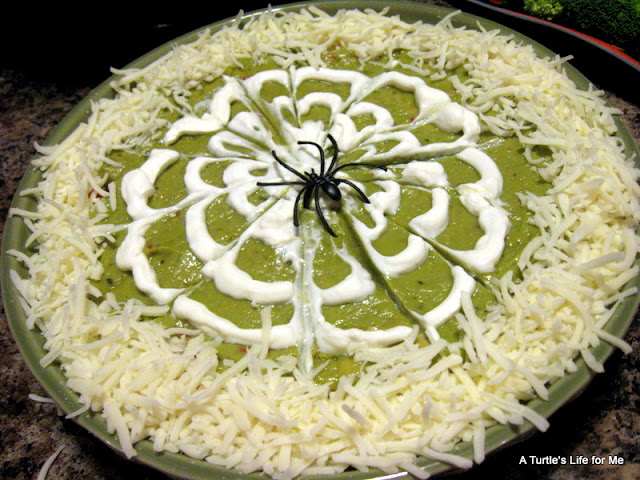 At the party, the host had a punch bowl with a skeleton ice head that was too cool! Must look for one of these molds on clearance this week! 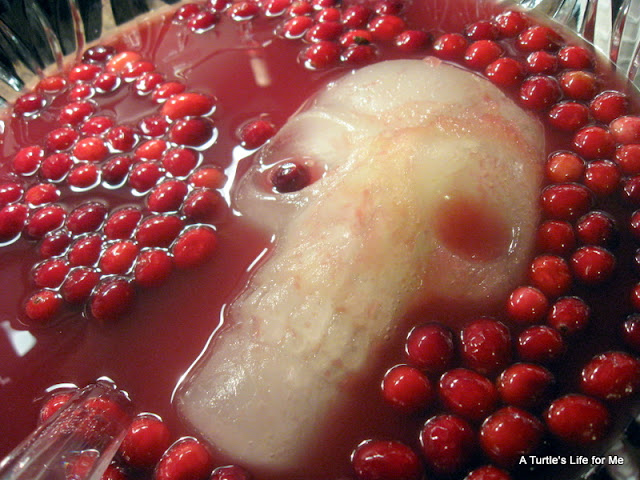 Here are some other posts that will help you throw the best Halloween Party yet!

Could use this for Christmas also..Make a Christmas tree in place of the spider web and for ornaments maybe trim with grape tomatoes, yellow and red peppers, maybe some drained black beans for garland?

Oh I love this too! Pinned it for next year's dinner!

Lookin' around for something last-minute,quick, & cute. I think we have a winner THX ~Gretchen

Colleen @ What's Baking in the Barbershop?!

Fun idea! Love the spider web design. :) And it sounds like it tastes delicious too!