My niece’s birthday was this weekend, which reminded me that I still need to go through all my old pictures and post all the cakes and cupcakes that I made in my pre-blogging days.
Well, that and I’m still dealing with this migraine, so nothing too fancy
going on over here until I get to the doctor tonight!
I can’t even remember how long ago I made these, but I’m going to guess 4 or maybe 5 years ago? These were a lot of fun to make, and I just wish the pictures had turned out a little sharper!
I don’t know what any of these dogs are supposed to be, so we’ll just go with colors.
The white dog had a miniature marshmallow under the nose for added height and then I just frosted over it.  The tongue is a Starburst that I microwaved for about 5 seconds and then used kitchen shears to cut to look like a tongue and make an indent down the middle.  The ears are min marshmallows cut in half and then the cut side dipped in pink sprinkles.  The nose is a Junior Mint cut in half and the eyes are mini M & M’s.  Just a lot of piping for this one, but it’s my favorite!
The bluish-purple dog had a large marshmallow under the nose for height and then everything else was pretty much the same- Starburst for tongue, Junior Mint for nose, M & M’s for eyes and miniature marshmallows dipped in sprinkles for ears.
The floppy-eared dog is more of the same, except his ears are Tootsie Rolls that I microwaved for about 5 seconds, rolled flat and then cut with kitchen shears. 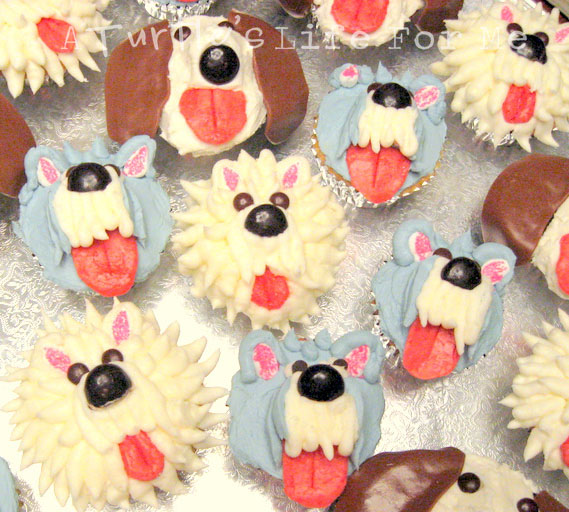 I shall try this dog cupcakes for my pet's birthday. I'm sure the kids will love it! I'll just have to limit the sweets that they eat because I worry that they might get toothaches or worst urgent dental care for eating too much.

So cue and they are making me very hungry!!! Lovee them! I am pinning these for sure :)

Hi!I'm visiting from Design Dazzle. These are super cute. Thanks for sharing!

Fantastic job on the "pupcakes"! :) I made black lab cupcakes before, inspired by our own black lab.

I am very impressed :) These are fabulous!