This post is going to be super picture heavy and really light on words!  So let me know if you have any questions and I’ll try to answer them in the comments section!

Our carnivals started about 2.5 years ago when my sister had a backyard carnival birthday party as a combined party for my nephews.  About a year ago, my niece had a carnival for her birthday party. And then last summer I threw my first carnival as an end of the year party for my son’s class (they had been together for 2 years and it was a fantastic group!).  So just a heads up that these pics are a combination of the two parties- some pics are mine and some are from my sister’s party! And I’ll also add, that most of these ideas are my sister’s and I just copied right along when it was time for me to host!

I’ll start with the games.  Most of our games had a “carnival booth” that started with a frame like this.  We just used $1 plastic tablecloths in bright colors that we stapled to the front of it the day of the party.  The large piece of wood sticking up is where we stapled the sign that named that booth. 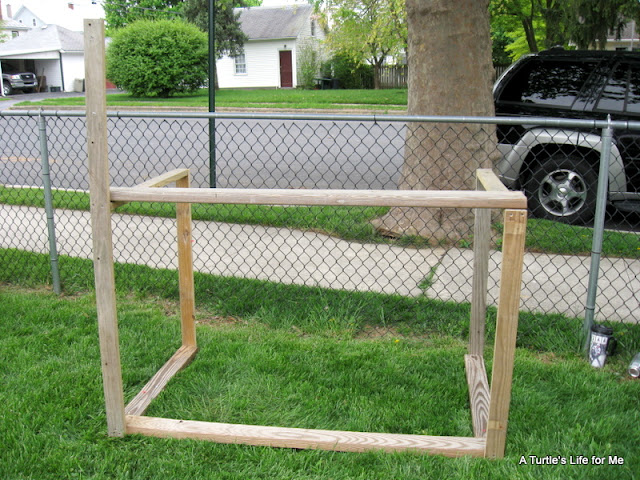 Here’s what they look liked once they were covered. 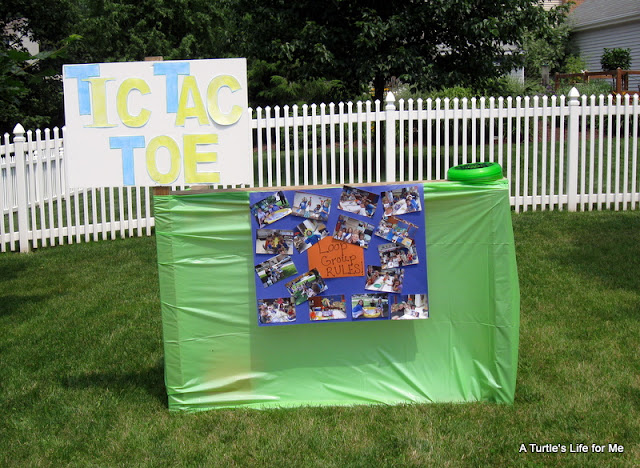 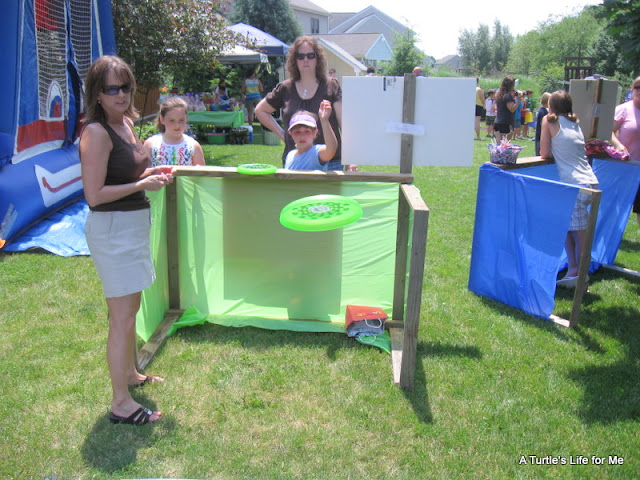 The Tic Tac Toe game is just a $1 shower curtain liner that we staked to the ground and then used blue painter’s tape to draw the grid.

More games that used the booths. 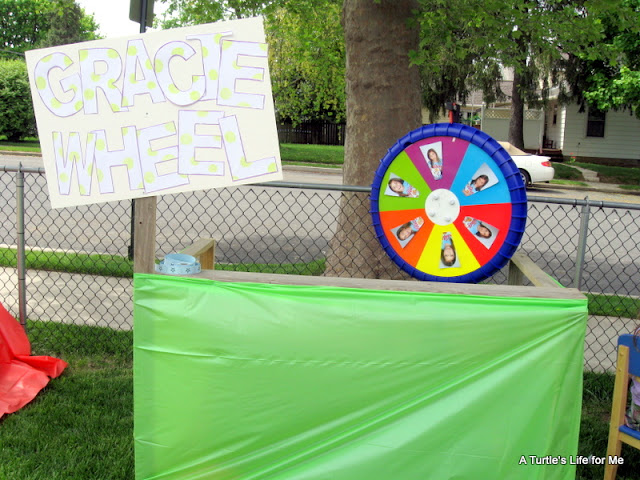 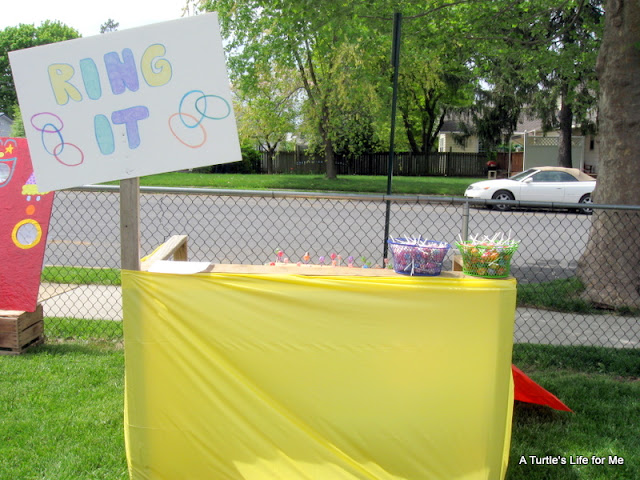 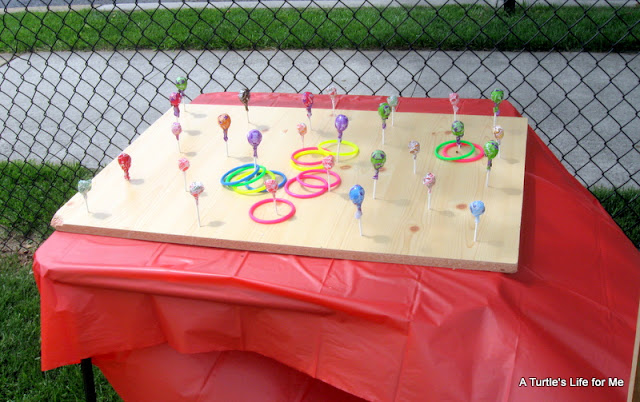 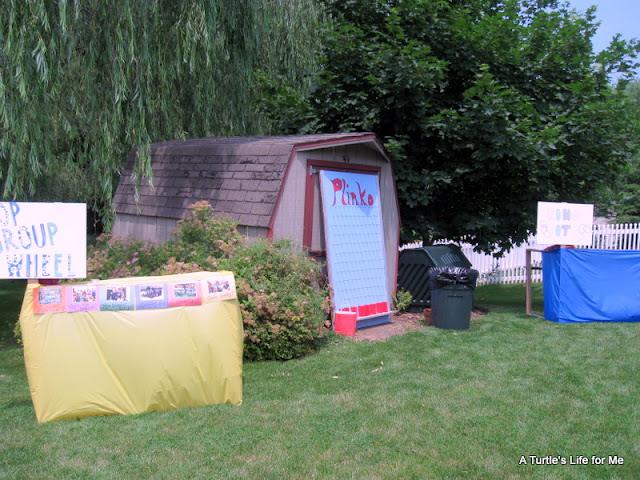 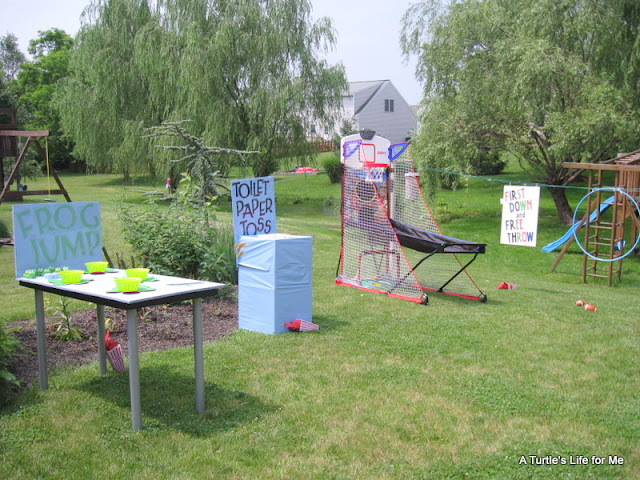 Not every game used a booth, though.

The Frog Jump I made using some scrap wood that I attached with some L-brackets.  I painted it, used my Cricut to cut out the letters and the “lily pads” are giant flowers from the one cartridge.  The bowls I found for a quarter at Target and we just screwed them down.  Then I found a bag of plastic frogs for a quarter after Easter (they were with the rubber duckies), and the kids had to stand behind a line (duct tape in the grass) and try to land in a lily pad.  Word of advice: it works better if you put a tiny bit of water in the bowl, otherwise the frogs jump right back out. It also works better up in a table like in the pic above (see, I told you, we learn as we go!). 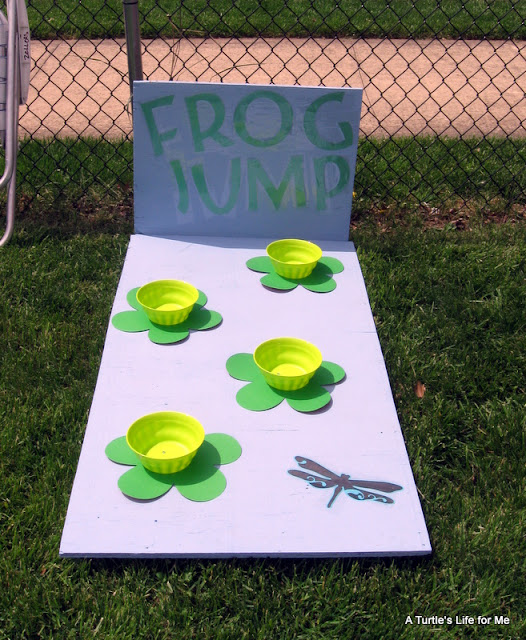 The Toilet Paper Toss game was a big hit with the kids, but obviously I could have made it look a little better! The crooked sign and crinkled paper drives me nuts!  It’s just two cardboard boxes that we taped together for height, cut a hole in the top and inserted a toddler toilet seat that I picked up for $1 in the original wrapping!.  I took 3 rolls of toilet paper that were about 1/2 used and then wrapped clear tape around them so they wouldn’t come unraveled.  The kids had to toss them in, obviously!  Word of advice: tape a plastic grocery bag under the seat so when you go to retrieve the toilet paper for the next kid you don’t have to dump the whole thing over.  We also put a brick in the bottom box so it wouldn’t blow over. 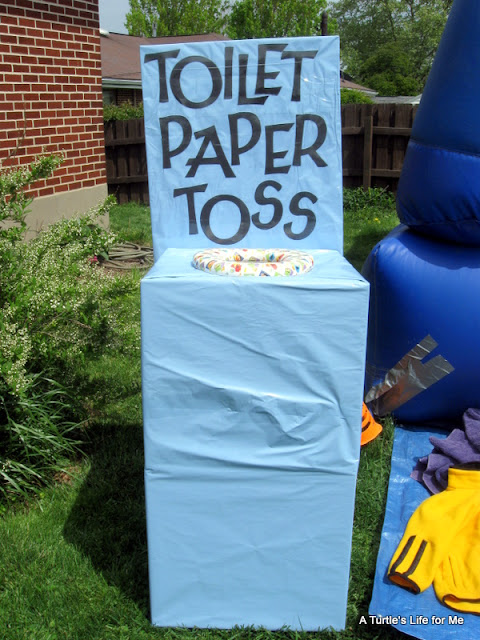 And it’s not a carnival without Plinko and a beanbag toss! 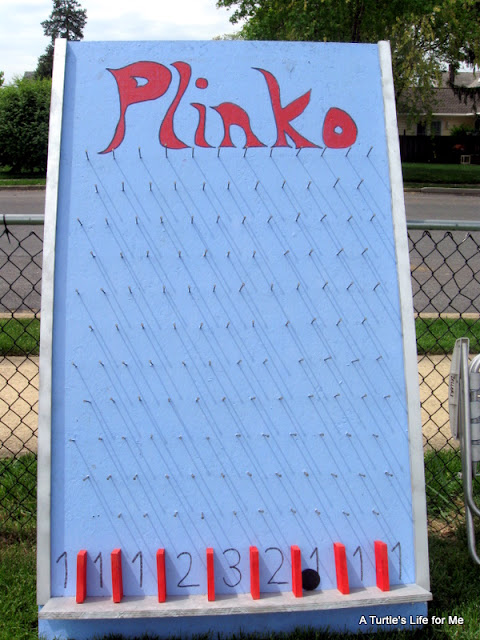 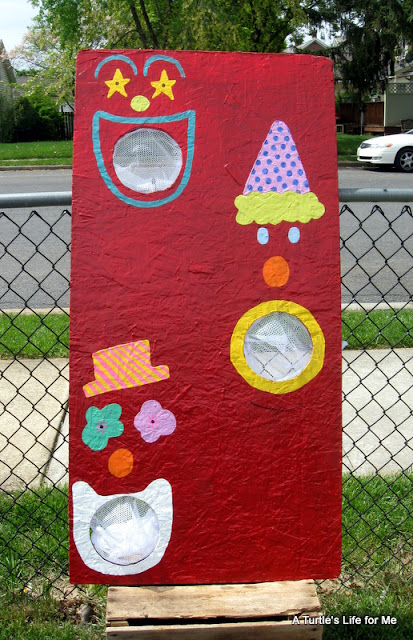 We also brought up our ESPN Zone to have a basketball free throw game and then we had a First Down game which was just throwing a football through a hula hoop that was tied to the clothesline. 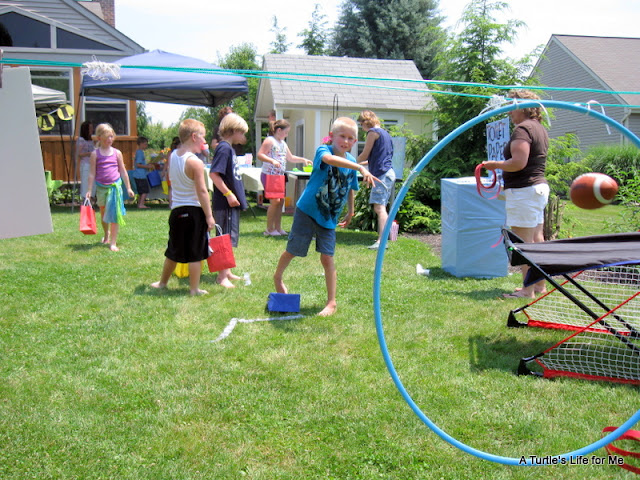 And you have to have a bounce house at a carnival!  My sister and I bought this off Craigslist from a rental company that was upgrading their equipment. We paid $200 for it and have used it for 2 carnivals plus 1+ years of the kids and their friends playing!  For $100 each it was well worth the money even if it is a beast to store! 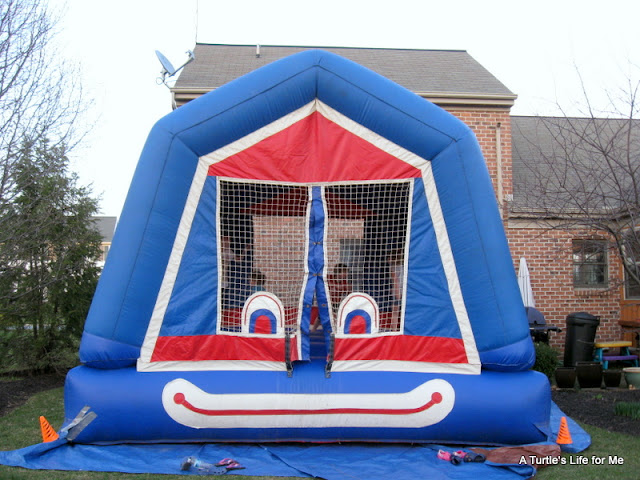 And, of course face painting!  If it’s a really hot day, put a little cornstarch on the skin first so the paint sticks. My sister made up a board ahead of time too, that had different designs so the kids weren’t asking for anything too outrageous!  And make sure to have a container of baby wipes at the table. 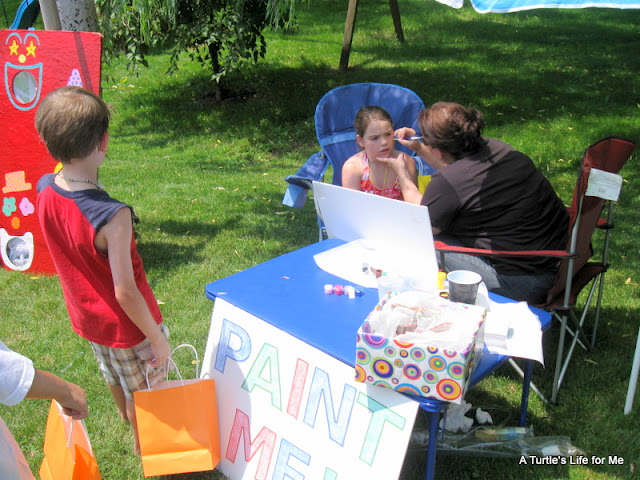 My sister had crafts at her carnival- I skipped them at mine! 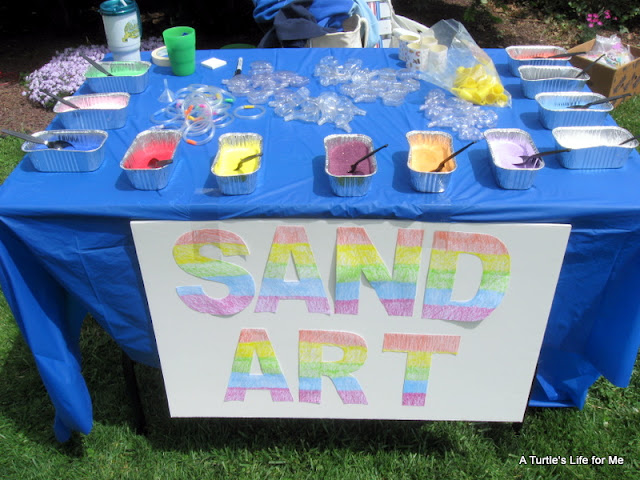 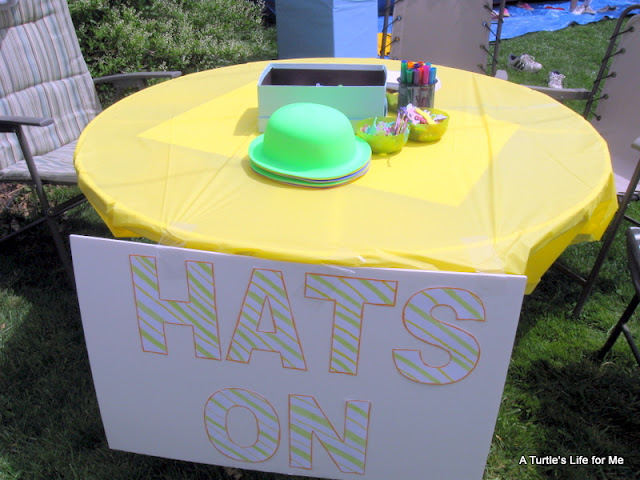 At each game, the kids could earn tickets based on how they played.  Then they got to redeem them at the prize table for all kinds of cool prizes!  These pics are just a sampling of the prizes. We had a couple tables worth at each party!  I collected things for almost a year straight and managed to spend very little on everything! 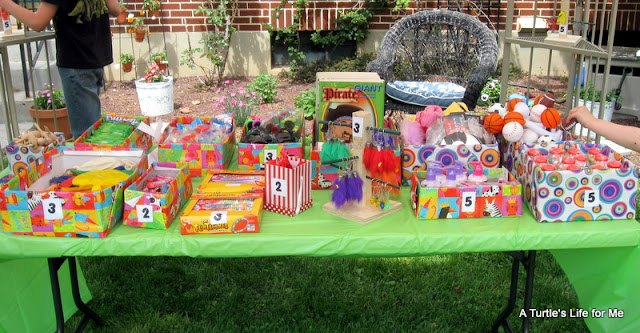 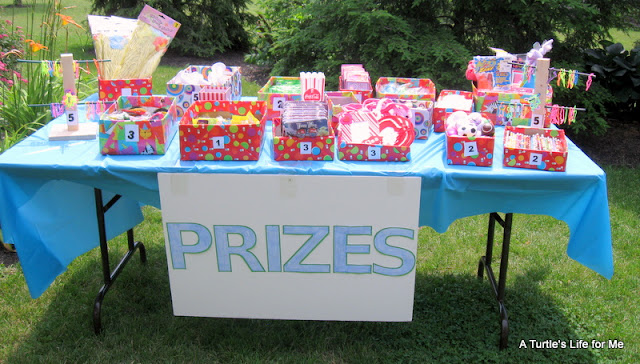 I also had a raffle table where the kids could redeem their tickets for a chance to win prizes.  I just used plastic popcorn containers and covered the word with numbers and then put matching numbers on the prizes themselves.  I just raided my gift closet for games, books, CD’s, etc. 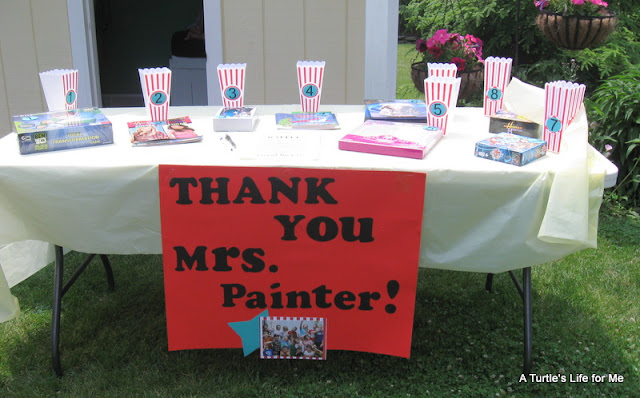 And then there was the food!
My sister made the mini cupcakes that looked like popcorn! 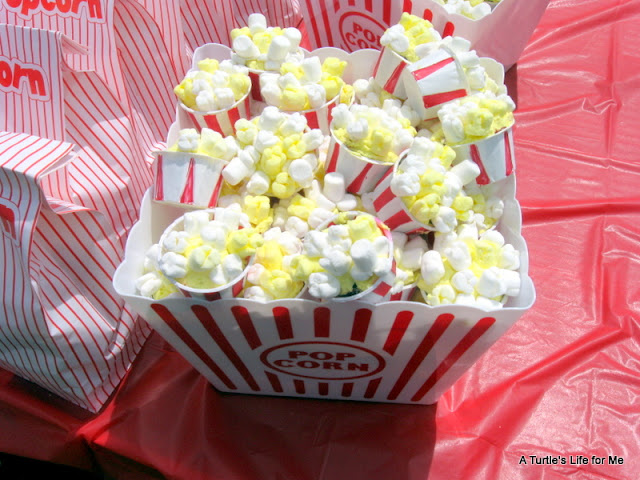 I’m not that patient, so I went with plain cupcakes with sprinkles on wrapped cardboard boxes. 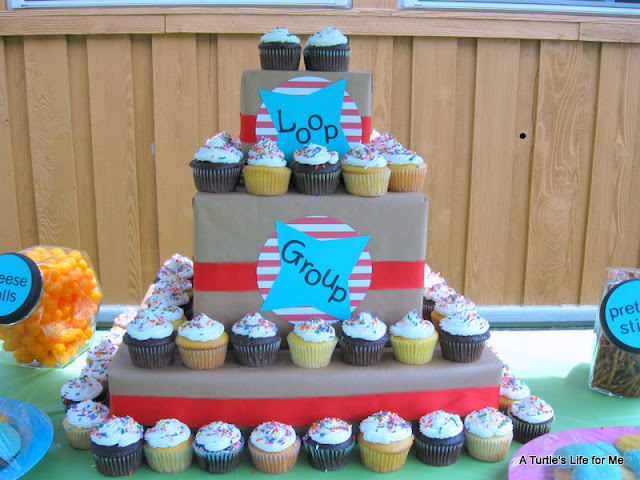 I found a set of 3 of these containers at a yard sale for 50 cents, so I painted the lids, used my Cricut to cut out circles and letters and have used them SO many times since then! 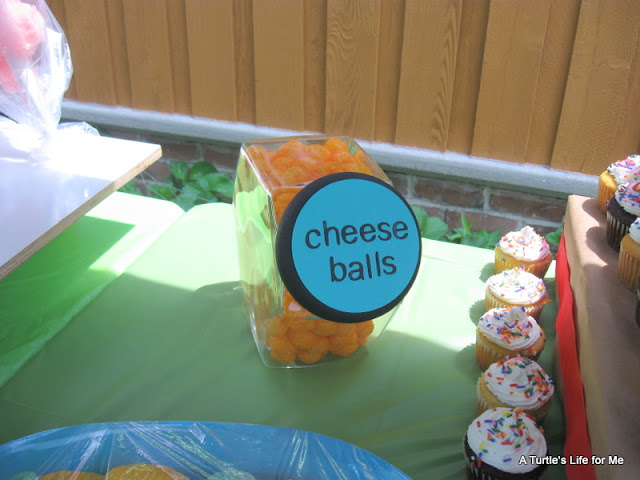 We always rent a cotton candy machine ($35 at our local hardware store) and my BIL drilled holes in boards for the cotton candy cones to stand in. 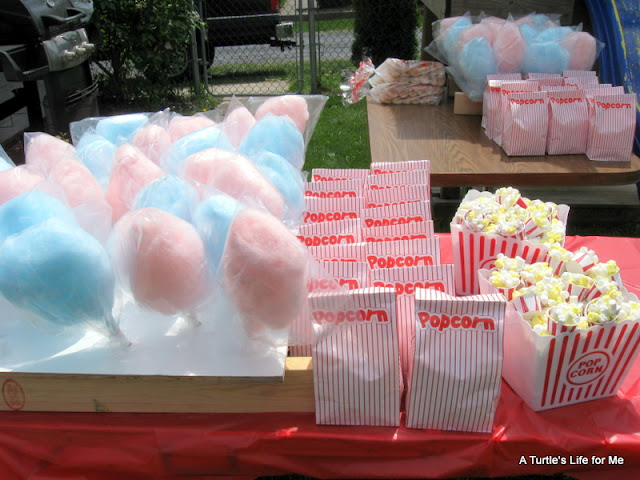 Just make sure you get a good one. The one I rented was a total flop and I was freaking out. I rented it a day early thinking I would get it done ahead of time and it just wouldn’t work!  I had 2 friends helping me and we pretty  much accomplished nothing (that had to do with cotton candy, at least!).  After a visit from the technician who assured me it worked, and hours more still trying, the store finally admitted when we returned it that it was broken. So we got our money back, but I would have rather had cotton candy.  In the end, we ended up with this 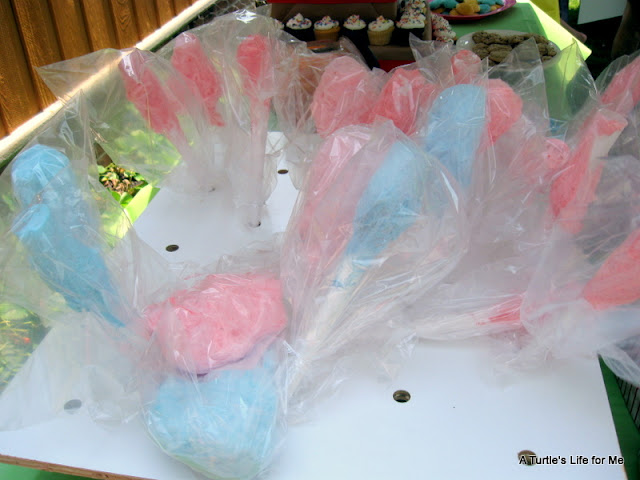 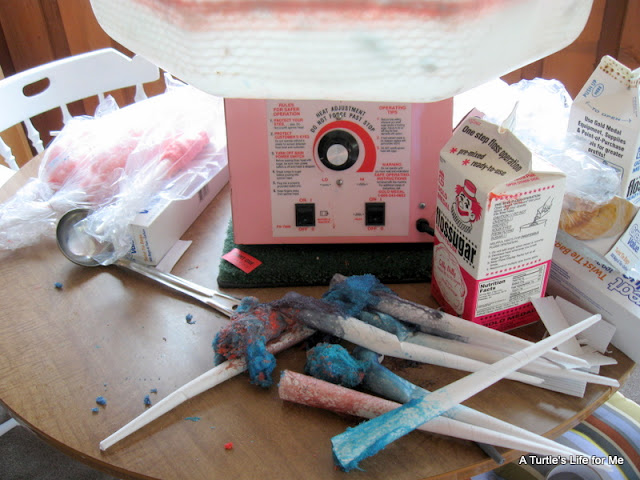 This was the menu for my carnival- cupcakes, pretzels, cheeseballs, sugar cookies, cotton candy, popcorn and grilled hot dogs wrapped in foil.

We had a TOTAL BLAST!!! For our party we had 24 kids and probably as many adults!  It last 3 hours and was on an unbearably hot day, but we hosed them down every so often out front and they kept on truckin’.

One final note, before the party starts, we hand each kid a colored bag with their name already on it.  As they earn tickets and redeem for prizes, they stick everything in the bag.  If I find anything on the ground it’s mine!  EVERYTHING must go in their bag!

Couple other things, be sure to put large trash cans out!  Also, take people up on it when they offer to help!  You need an adult working at every station- I set up a schedule and taped it to the closest door and put people down for 30 minutes shifts and then they would rotate. They liked seeing the different games and some of the shifts were to just walk around so they could have fun too!

I’m already starting to think about another one for this summer even though I don’t have any reason to have one!  It is seriously SO much fun!

I So Love It !!! Im A Teacher and plan on having a circus carnival for our school fund raiser !!! I love creating my own things and these are very awesome ideas !!!!! Thank you so very much !!!!!

Great ideas..you are not going to believe this but we are in 2021 and now I am looking for ideas for Kid's Day here in Mexico where kids can't get out of their cars and can just play from far away because of Covid 19. Thanks for the ideas :)

The Carnival Is In Town And It

This website uses cookies to improve your experience while you navigate through the website. Out of these, the cookies that are categorized as necessary are stored on your browser as they are essential for the working of basic functionalities of the website. We also use third-party cookies that help us analyze and understand how you use this website. These cookies will be stored in your browser only with your consent. You also have the option to opt-out of these cookies. But opting out of some of these cookies may affect your browsing experience.
Necessary Always Enabled
Necessary cookies are absolutely essential for the website to function properly. This category only includes cookies that ensures basic functionalities and security features of the website. These cookies do not store any personal information.
Non-necessary
Any cookies that may not be particularly necessary for the website to function and is used specifically to collect user personal data via analytics, ads, other embedded contents are termed as non-necessary cookies. It is mandatory to procure user consent prior to running these cookies on your website.
SAVE & ACCEPT
2571 shares