This is the latest I remember us ever getting out of school (but I have a very short memory, so don’t hold me to that!), and all the kids have definitely been “buggin’ for summer”!  So we rode that theme the whole way through the end-of-the-year party yesterday!

Plus the room moms before me normally have a bug theme party every 2 years, so it kinda made the decision easy… but, yeah, it’s because we want summer already!!

The first station was snack where the kids got to make dirt pudding (chocolate pudding, crushed Oreos and gummy worms)!  We also had green grapes that one of our moms was nice enough to put on little toothpicks with eyes so they looked like worms (I think I intimidated most of the moms when I “suggested” this because this was the absolute last thing taken from the list! haha!!).  We had ants on a log, a veggie tray and drinks! 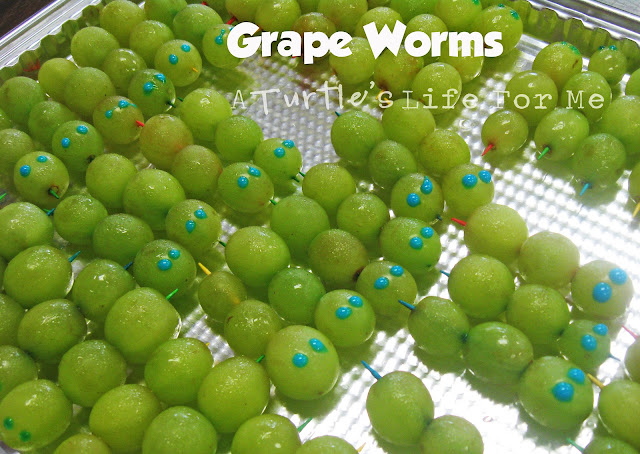 We also did some bug crafts where they made a big headband and binoculars out of toilet paper rolls!

Also, you can see the t-shirts we made for each kid! I LOVE how they turned out!!  I ordered all the shirts with the back screenprinted with

Then I had some of my wonderful moms come in and help the kids put their thumbprints on and the moms wrote their names using a really fine-tip Sharpie (bleed-proof and fade-resistant).   After we let them dry overnight, some other (equally as wonderful) moms took them home and added all the bug details to the thumbprints using the same Sharpie and then heat set them for me since I’m allergic to irons.  They are adorable!!!

(and yes, I will be watermarking over my kids’ faces from now on!) 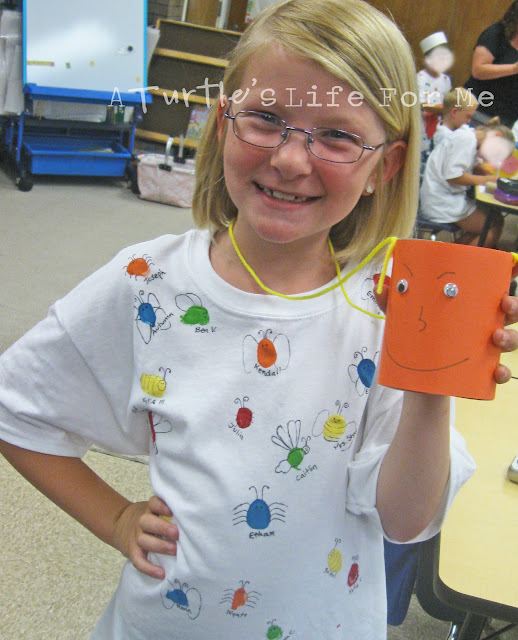 Then we moved to Bug BINGO!  I copied all the cards, laminated them and then just cut construction paper squares as markers.  I raided my (infamous if you ask my husband) storage closet and found enough random goodies that each kid could win twice and pick their prizes. (don’t even worry about the Easter tags… my sister picked those peace lollipops up for me for 10 cents each and they were perfect!) 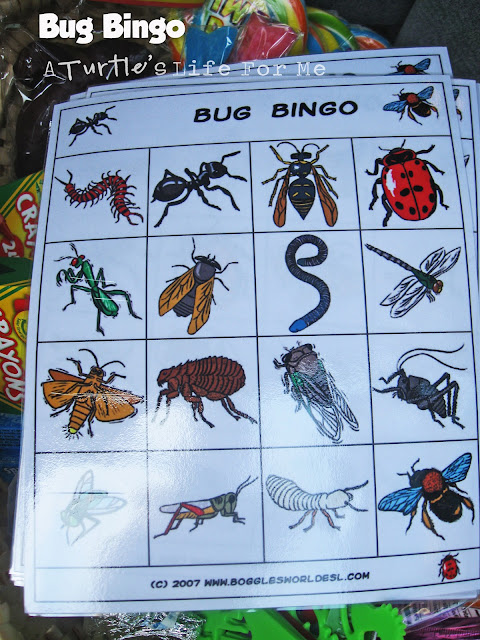 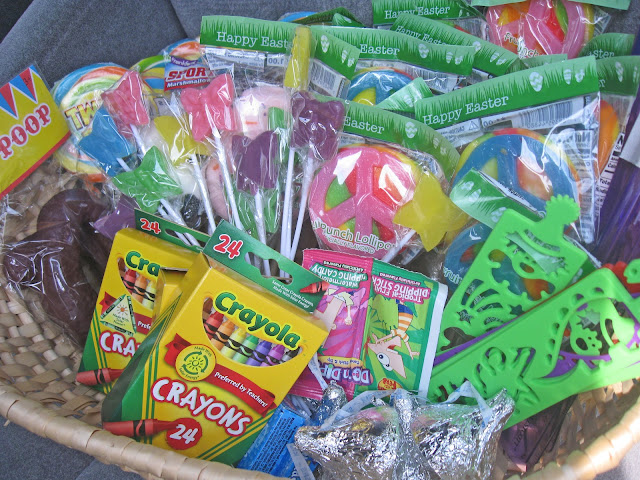 Unfortunately, we had a completely random, rain-filled day, so we had to move a couple stations indoors, including the parachute one which wasn’t quite as effective as it would have been in an open field!  I had plastic Easter eggs from my sister that were decorated to look like bugs.  We threw them in the middle of the parachute and 2 kids stood on the outside with nets and they had to be the bug catchers and catch all the bugs that the other kids popped off of the parachute.  We rotated till everybody had a turn and then we moved out to the hallway for Bug Limbo.  I took a pool noodle and hung some of my Halloween spiders from it and the kids had to limbo underneath without touching the spiders.Then the whole class came back together as a whole to end with some relay races.  I used potato sacks and they had to be caterpillars and get to the other end where they were given a pool noodle and a balloon that they had to get back to the starting line where there was a round white laundry basket on it’s side that they had to get it into.  Again, would have been great outside, but inside it got a little chaotic!  The balloons were supposed to be decorated like bugs, but my morning didn’t turn out like I expected so there wasn’t time for it.  The idea was they had to get the bugs into the spider webs (the laundry baskets).  Here’s what the one bug I did decorate looked like! I made up favor bags for all the kids with things I had picked up throughout the year for pretty cheap- stencils, wooden shapes to paint, colored pencils, bubbles, marshmallow lollipops and there was more but I can’t even remember right now!  I found a ladybug clipart that I used and just typed these up, cut them out and glued them on to white lunch sacks!  Easy peasy! 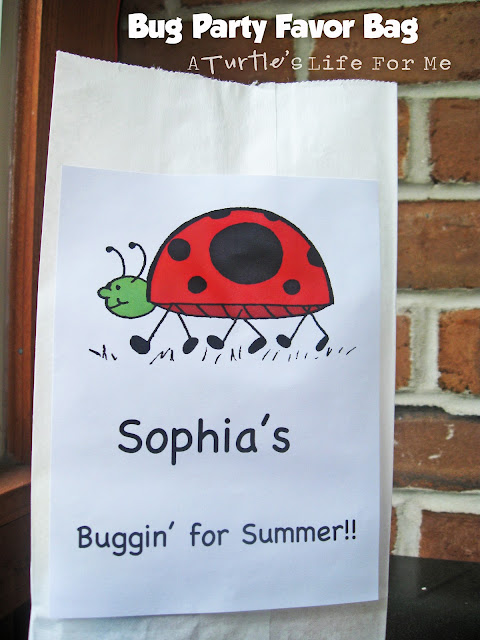 And this, my dears, is what I’ve been busy with!  But it’s summer!!! It’s summer!!!
Click here to cancel reply.

What type of paint did you use on the shirts?

You can just use fabric paint that's available at any craft store! It works really well!

Such cute ideas, all of them, but I LOVE the grapes!

Great ideas! So clever Little Turtle you! :) Hooray for summer is Right!

This looks fab so many cute little details - but defo time consumming. Great you could get the other mom's on board too. Bet the kids loved it!